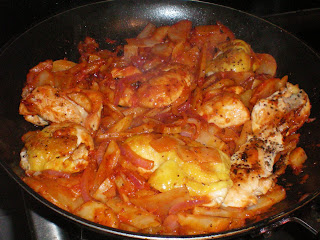 I get excited when I find something simple, cheap, and healthy that I can cook. Even more so when my kids actually are force fed  enjoy my creation. A while back, (geez, has it been already been a year?)I posted about a wonderful book that I had come up on, The Mexican Kitchen, by Rick Bayless. A year later... it is STILL one of my favorite cookbooks. Although I'm still having a bit of trouble with the whole "bean" thing...I remade that same dish from the previous post, Tinga de Pollo y Papas. The last time I made this, I used the original recipe and after watching my kids guzzle down a gallon of milk during dinner, I realized that maybe I should make it a weeee less spicy.

Toast childes over med. heat, Then soak in hot water and let rehydrate. Drain and discard water. (canned chiles... don't worry about it)
While chiles are soaking, roast unpeeled garlic on skillet or  (on foil) on a comal, turning till they become soft. (15 min) Cool and peel.
Roast tomatoes (on the same foil)  until blackened and then flip and do the other/s.
In a blender, add tomatoes/juices, chiles, and garles and puree.


*Sidenote... if you're too lazy/tired/just don't wanna roast tomatoes .... use a drained 12 oz can of  tomatoes. For the sake of my kids, I used the above recipe, but STILL added another 1/2 can of tomatoes to lessen the spicy kick.

I also added a handful or so of fresh spinach. Just cuz I can. And I can't get my kids to eat it any other way.

The Main Dish:
1 tsp. oil in a med. saucepan over med/low heat. Add chicken, s/p. Cook until meat is tender. Remove to plate.

Original recipe says to then shred the chicken. It tastes great, (and can also be used for taco filling the next day.) but I've also left it whole and haven't had a problem as a main dish.


Original recipe also says to coarsely shred the potatoes, but as a working mom.. i don't have the time nor patience. I thinly slice mine.

Heat the remaining oil in skillet. Add potatoes/onion.  Cook/stirring/scraping any brown bits off the bottom until browned. (about 15 min)

Add sauce, oregano, bring to a boil. Reduce and simmer until sauce thickens. 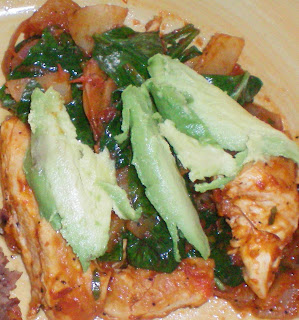 This series was created by Eddy Reyes from Secret Sidewalk Tattoo in Hayward, Ca. and Jesus Cruz from CalifaRifaPro, Bay Area. We're so excited to be a part of this.

Thanks Eddy and Jesus for the opportunity... this came out amazing!!!

At the end of the Rainbow... 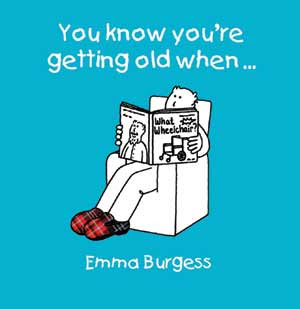 The day is coming.
Sooner than I would like.
Im getting old....
How do I know?
What can you add to this list? Hubby and I finally sold my baby...my Chevy Tahoe. "Boohoo." you're probably thinking," it's just a truck."  But to the fam-bam and I, it wasn't. There were so many memories. How we bought it, the amazing airbrushing hubby painted on it, the gifts building it, haha.... the movie Transformers, and how after watching it, the kids wanted to ride in the Transformer truck cuz it was just as cool. I never had a problem with it, and spent many nights in there on spur of the moment camping trips, fishing adventures, the exciting day of picking up hubby from the border, moving to mexico, and countless others. The kids are bummed too, but after changing my visa, my truck is no longer legal and SAT can take it away. And with the new "drama" in GDL, the truck grabs a little too much attention, which isn't always a good thing.

So, suegro and I made the journey up to the border. Twenty two hours later, we arrived in Phoenix to the eager new drivers of my beloved ride. My BIL has really been great. He bought our other car before we made the journey to Mexico and when having difficulty finding a buyer for the truck, he was the first one to jump on it. He had hotel (well, motel) rooms waiting and a few hours later, they jumped in the truck and headed back home...leaving me to rest before my plane ride.

Ooooohhhh, have we've learned not to rely on people in Mexico...... and how frequently I forget. I placed my trust in a "friend of a friend" who books airlines and was told to await confirmation 6 hours before the flight. 6 hours came and went... 5.... 3....1... I was at the airport counter, pestering the attendant to recheck the flight list for my name. Nope. And in fact the flight was OVERBOOKED by 2 people. I wasn't going anywhere.

After panicking a bit, checking the next airline, panicking, checking the next airline, etc....etc.... I finally booked a flight leaving the next day. In the meantime, I returned to the motel that I had previously rested in for a bit, for good reason. It was only 29 bucks a night and I had little cash. The room was exactly what you expect in a roach motel.... 'cept I didn't see any roaches and if I had, they wouldn't have a chance against their Mexican cousins.... so I wasn't too worried. You do get what you pay for....the nonsmoking room smelt like my smoking grandmother's entire house condensed into a single room with one flickering light....in the bathroom.

Nevertheless, it's 106* outside. I'm discouraged to leave the room in fear of dehydration and leary about staying, since this is where scary movies come from. At least I brought my laptop.

Refried Dreamer
I've been living in Mexico now for about a two years with my hubby and 2 kids. Not exactly by choice, but we're here nonetheless. Luckily, I live with quite a few of the accomodations that i was used to in the states. In spite of those convienences, we also have a water tank with asbestos, outdated electricity, massive amounts of dust, caterpillars that burn your skin, and thousands of windshield washers on every street corner. My kiddos and I are learning to speak spanish and adjust to life away from our family and friends in the States.